Should we be concerned by gambling risks in 2021’s top Christmas gifts?

With Christmas fast approaching, many young people will have prepared their wish lists and the likelihood of video games with an inherent gambling risk featuring is high; a fear that has even made it as far as the House of Lords as a discussion topic in recent weeks.

Christmas 2020 was reportedly the greatest ever for the video games industry, with an increase in purchases due to the global pandemic increasingly digitising our lives. With the world still fighting Covid-19 a year later, it’s widely expected that the industry will benefit again.

The eSports industry is clearly growing rapidly and following its recent release, FIFA 22 is tipped to be heavily gifted this Christmas. However, an increasingly popular wish amongst young people who already own the game is to be gifted FIFA points, for the game’s Ultimate Team mode (FUT).

This means parents investing real money into their children’s games and buying in-app purchases which in FIFA’s case are hidden ‘player packs’ which may – or may not – increase the strength of a player’s squad. This is a ‘loot box’ feature!

In short, young people are asking for considerable sums of money to be spent as presents on additional features which do not guarantee any tangible return.

In fact, research by the Department for Digital Culture, Media, and Sport, states there is less than a 1% chance of securing the rarest and best players in a FUT pack. More than likely, gamers will receive a player or mode they already have or don’t want! Young gamers, however, remain oblivious to these shocking statistics.

Exchanging real money for randomly determined players through loot boxes is a practice normalising the sense of committing money to a transaction with no guaranteed return, mirroring gambling.

FIFA is believed to have become a ‘pay-to-win’ game involving gambling on success and although the fear of loot boxes divides opinion, they are a huge concern to those who perceive them as a gambling mechanic, accessible to children.

EPIC Risk Management’s gaming and eSports consultant Jonathon Peniket recently represented the global leaders in gambling harm minimisation at a House of Lords event to discuss the impact of loot boxes in the company of Lords peers, academics, charities, and gaming industry representatives. 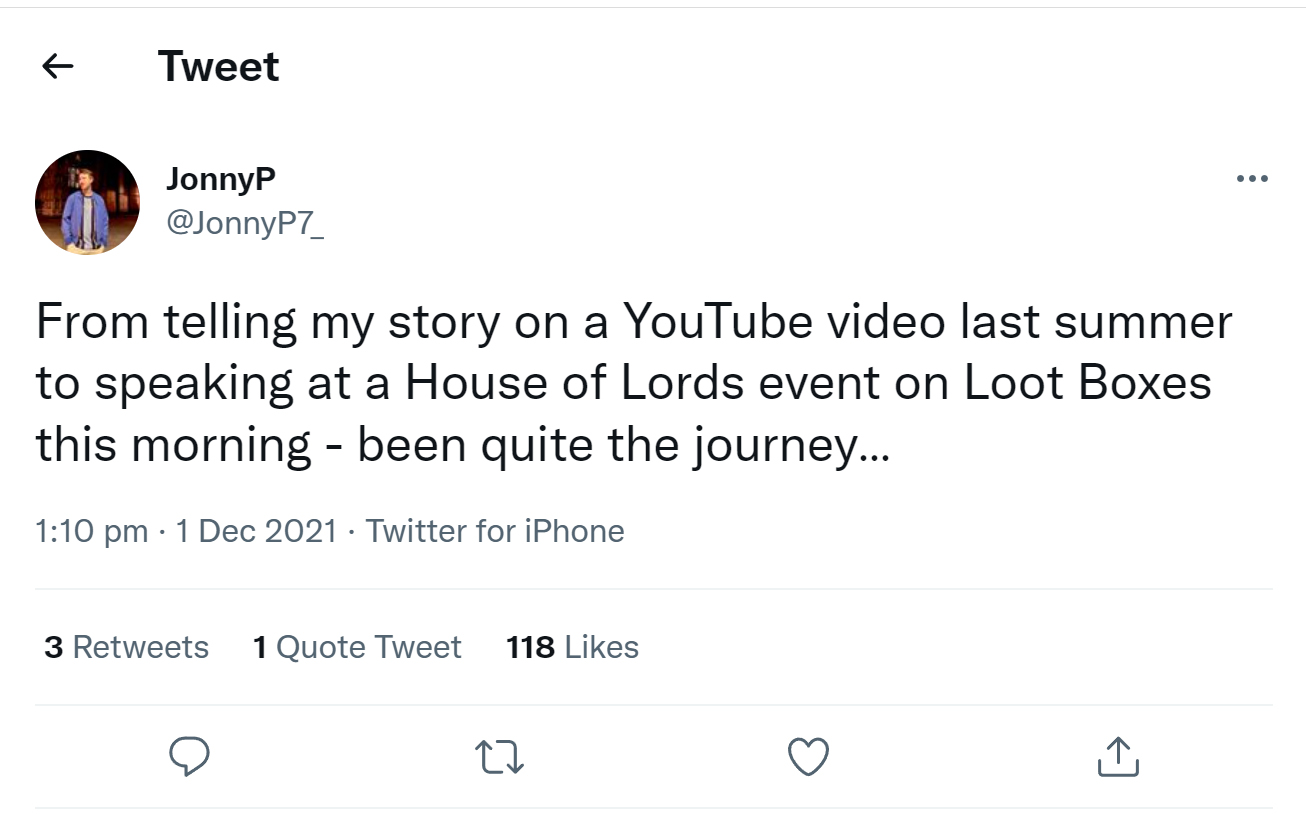 The Gambling Commission don’t currently classify loot boxes as gambling; however the UK government are investigating whether there are grounds to reconsider this classification.

Concerns were raised over the need for greater regulation, and the ease with which large sums of money can be spent by children.

Peniket told the assembled audience how the global pandemic has intensified the already increasingly worrying issue of loot box addiction and gambling and gaming-related harm, explaining after the event:

“In the UK alone, it’s estimated that the loot box market is worth around £700 million, whilst over 250,000 young people have an addiction. Loot boxes desperately need regulation in the UK as there has been in other European countries.

“The government’s call for evidence on the impact of video game loot boxes closed over a year ago and we’re still waiting to hear anything from it. However, the House of Lords event I attended was a good step in the right direction to minimising harm.” 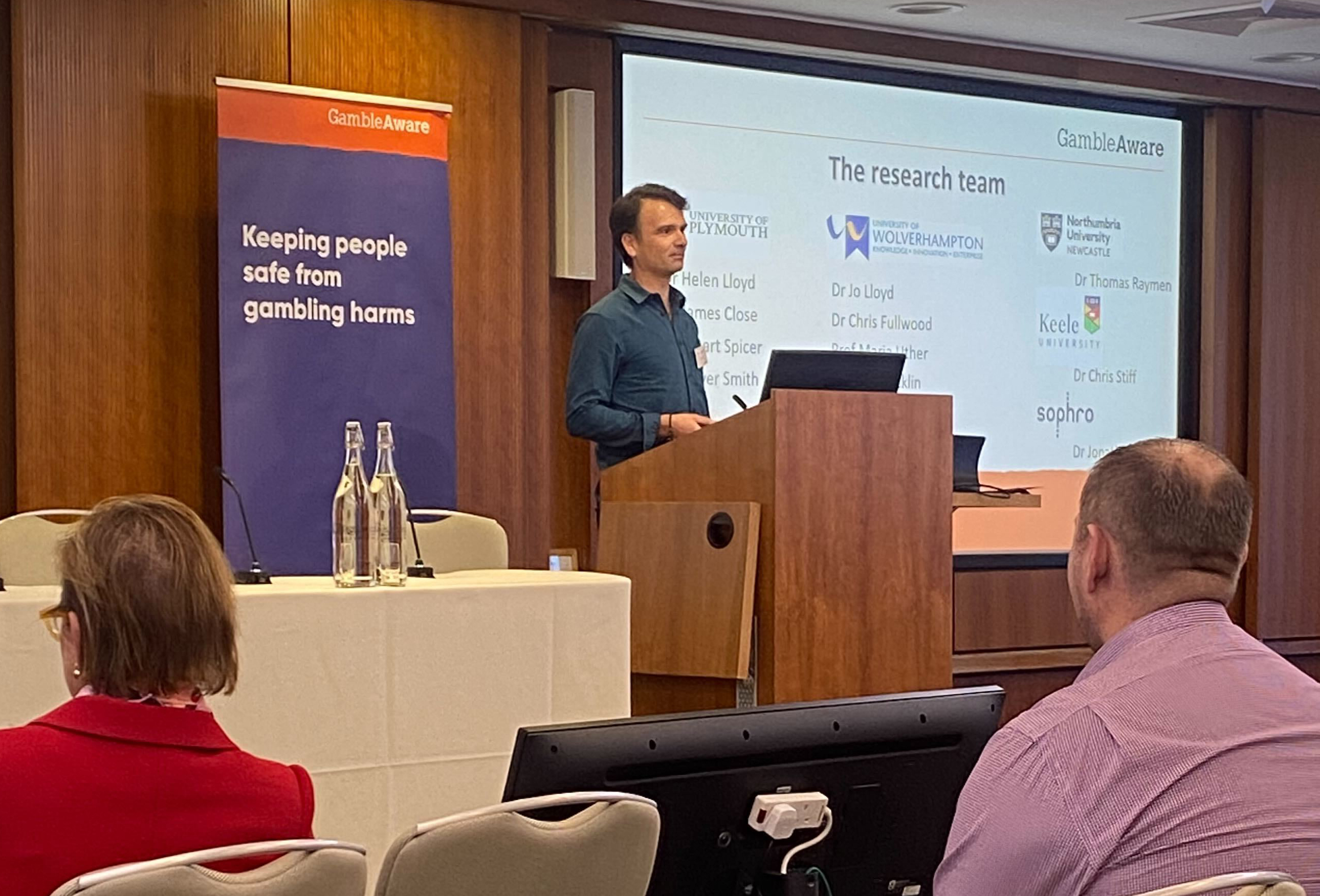 A study by Dr James Close from the University of Plymouth (pictured above) states that 25-50% of children are estimated to have opened a loot box. It further explains:

“Games developers (unwittingly or not) are disproportionately profiting from moderate and high-risk gamblers, rather than high earning customers.

“Such patterns of spending mirror those observed with gambling revenues and have implications for harm minimisation and ongoing policy debates around loot boxes.”

Klarna is a service that causes understandable concern among the gambling harm minimisation community, as those without the immediate funds to pay for player packs can be lured into debt on the ‘buy now, pay later’ premise – an issue that has appeared repeatedly in the back stories of those that have suffered gambling harm, as their temptation is often to gamble further to win back the money to pay off the debt on a loan.

EPIC are continually working to try and take the problem out of gambling through education, awareness, and prevention. Our harm minimisation sessions within the education sector for pupils, parents and teachers focus on gambling and online gaming with emphasis on loot boxes, addiction, and mental health, teaching people to make better-informed decisions when engaging in gaming and developing improved awareness in adults.

Currently, a lot of focus is placed on the individual – or in the case of minors, their parents or guardians – to regulate how they interact with online gaming and subsequent features and in-game modes. So, when it comes to gifting, parents or guardians are central to minors’ accessibility.

Our work with parents and teachers is crucial, ensuring adults who are unfamiliar with online gaming are aware of the associating risks and dangers, and how to regulate spending if they are to purchase additional features for their children.

As the UK government continue to determine whether video game loot boxes encourage or lead to problem gambling, EPIC’s Jonathon Peniket advises adults to remind themselves of the dangers this gifting season, with this timely advice:

“I strongly urge parents be aware of the gambling features on video games and familiarise themselves with the parental controls available on consoles.”